This is a continuation of my series of posts about repair at Burning Man. I travelled to the heart of Nevada’s inhospitable Black Rock Desert to study the effects of accelerated entropy on technology.

Most people only stay in the Black Rock Desert for the week of Burning Man. But the Department of Public Works has to run eighty vehicles non-stop in the desert for two months setting up and tearing down the infrastructure for Black Rock City. Their work never stops, even in a dust storm. They buy most of their vehicles at auction, and you can imagine what sort of vehicles they get with their spartan budget.

The task of keeping the DPW fleet running lies with Jim Sweet, known on the playa as ‘Wingman.’ He runs the three-man repair crew responsible for keeping these clunkers humming. His team may be the most important folks on the playa: without them, work would quite literally grind to a halt.

Wingman’s ‘shop’ is a shipping container full of spare parts (primarily air filters and alternators), cases of oil, hand tools, an air compressor, and one luxury item: a tire changer. Their setup is strictly mobile: I didn’t see much that you couldn’t fit into a truck bed toolbox. I spent a day shadowing Jim, watching him handle the never-ending trickle of people with car problems that filtered under his shade structure. He has a heart of gold. There’s a huge temptation for mechanics to focus on the problem, and gruffly ignoring the people with the issue. Jim doesn’t work like that. He refused to talk to anyone about their car until he knew their name.

His approach isn’t just altruistic. He thinks that if people know the person at the repair yard, they’re more likely to try to fix things themselves and perform regular maintenance. This is a really interesting idea, and jives well with my philosophy that if you can’t fix it, you don’t own it.

An aside: Jim wanted me to make sure to mention that his repair shop is for DPW vehicles only. There isn’t a repair camp on the playa large enough to handle all the vehicle problems that happen out there, and he’d be quickly overwhelmed if they tried to help everyone. So be prepared to fix it yourself!

Jim describes his work as ‘triage.’ He told me that he’s forced to avoid major jobs in the field because the dust fouls everything up. Instead, he hacks in whatever fixes he can—anything to keep the car running long enough to get it back to a real shop. I asked him what the most common repairs were, and this was his list.

The law of the land is simple: make it work with what you’ve got, or you’re not getting out. I saw another art car with a failed alternator. The proprieters of this vehicle had managed to snag a new alternator, but it was the wrong one. Hey, an alternator’s an alternator, right? You just gotta make it fit. So they modified heavy-duty tent stakes into metal brackets and wedged the new alternator into place. Presto chango, a functional art car!

Burning Man: Repair on the Playa 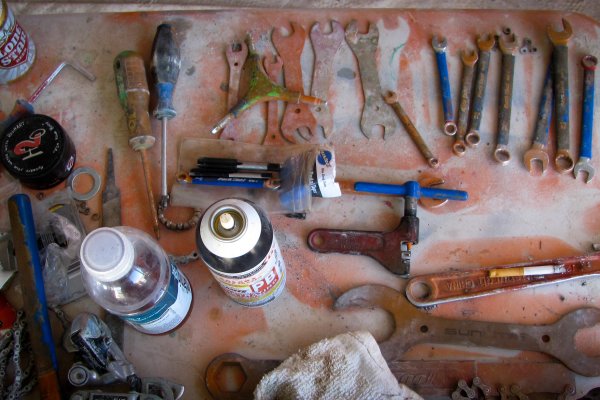