One time when I was cleaning out my backpack, I found at the bottom of the laptop pouch two cracked plastic laptop feet and a small handful of tiny metal screws. By the time I’d had my MacBook Pro for only two years, the lower case was down to just one foot and three screws.

Talking to other MacBook users, I realized I wasn’t alone: The aluminum case flexes when you pick up your laptop, shaking the little screws loose. And the heat from the processor loosens the adhesive on the feet over time, slowly rendering them free.

Missing feet and AWOL screws can let in undesirable elements such as dirt and moisture, mucking up the inside of your laptop. Not to mention typing on a three-legged laptop is about as annoying as sitting in an unlevel chair. So, if your MacBook is feeling a little unstable, or like it has a screw or two loose (same, MacBook, same), today things start to get better: We’re now selling underbelly repair kits. That’s the smooth, shiny underbelly of your laptop, to be clear, not the seedy underbelly of London street urchins.

If your laptop has lost a foot (or all four), our foot kit has the full back-on-your-feet complement: Feet. Angled tweezers. A precision bit driver and the required bit. An adhesive-removing cloth and alcohol wipe to neaten up the grimy residue that your broken feet left behind.

Lower case screws vanish when you weren’t looking? Many of the screws are so short that once they’re loosened and stick out a bit, it won’t be long before they disappear completely. Our screw set will help your laptop get its life back together: It’s got three 14mm Phillips #00 screws and seven 3mm Phillips #00 screws, plus the precision driver and bit you need to secure them.

If, like my laptop, yours has both problems at once, check out the screw and foot kit, which has everything from both kits in one handy bundle.

Some days you feel like you’re barely holding it all together. At least give your laptop the gift of not having to feel that way anymore.

Links above are for 2008-2013 MacBook and MacBook Pro Unibody models. If you’ve got a 2012-2015 MacBook Pro Retina, check out the Retina versions of the foot kit, screw set, or screw and foot kit instead. 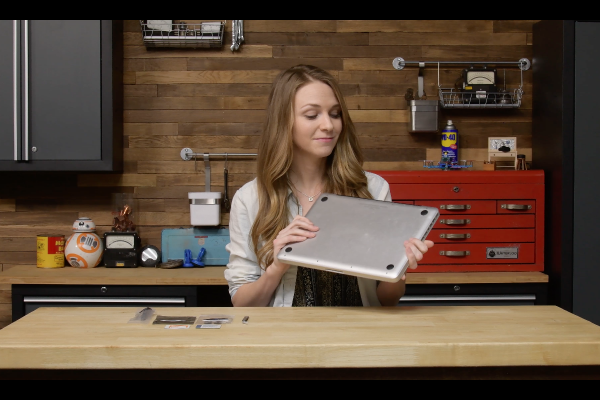 We Want to Help Your MacBook Get Back on Its Feet