We have long been fans of HP’s repair-friendly designs around here, and we wholeheartedly hope that the future of technology is not only thin-and-light, but also repairable. (That said, if we had to pick one, it’d be repairable—just saying.) The x360 EliteBooks are presented as “ultraslim notebooks”, and slim they are, but in most cases, slim doesn’t come without repair compromises. Let’s see what’s inside this EliteBook x360 1040 G5.

Remove the Torx screws securing the lower case, do a little prying, and you’re met with a friendly sight: the battery, SSD, and speaker units are immediately accessible and can be removed with just a couple standard screws. That may not sound like a big deal, but those are three commonly-replaced components, and most modern-day notebooks trap them with glue and/or solder. Past those friendly faces, though, we start to feel a little more melancholy.

The motherboard, accessible after the removal of the heatsink assembly and a bunch of (labeled!) connector cables, comes out in one piece. We’re sad to see RAM and CPU both soldered to the board, preventing future upgrades. Plus, all the high-wear components (like ports and buttons) are soldered to the main board—meaning you’re looking at a full-on motherboard replacement for one bad USB port. We’ve seen manufacturers get around this problem with dedicated IO boards, and HP themselves have included modular ports in EliteBooks past.

In a final bit of mixed news, the screen is technically replaceable, but the display does not come out without a fight, and will probably break in many repair situations. Cabling under the display, once you reach it, is straightforward, which means replacing ones threaded through the EliteBook’s hinges won’t be too tough. A full display assembly replacement will be a much safer, if pricier repair alternative. 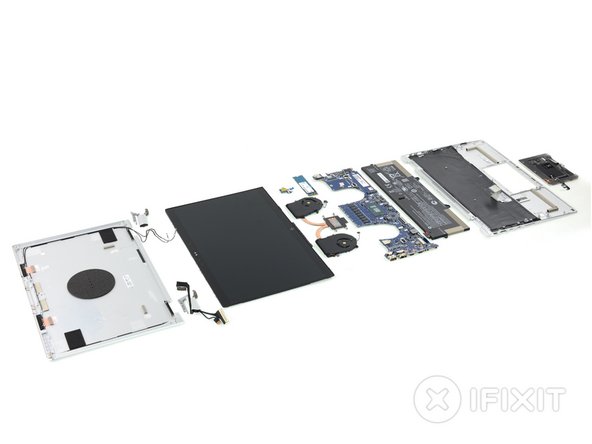 With the EliteBook x360 1040 G5 in pieces on our teardown table, we’re a bit conflicted. We lauded this machine’s less-flexible sibling with many praises, and it’s hard to not make too many comparisons here. On one hand, this machine is very repairable compared to glue-filled competitors in the thin-and-light-and-powerful space. A user-friendly replaceable battery and SSD are amazing to see this far into the 21st century, and HP still provides free repair documentation for each of its devices. On the other hand, even past x360 models have had fewer components soldered to the motherboard, and this iteration still relies heavily on adhesive, tape, and fragile clips to hold everything together. We would also love to see a little more modularity in some of the larger components to keep the cost of repairs down.

All in all, this EliteBook x360 earns a respectable 6 out of 10 on our repairability scale for an earnest effort to maintain repairability in an ultraslim device.