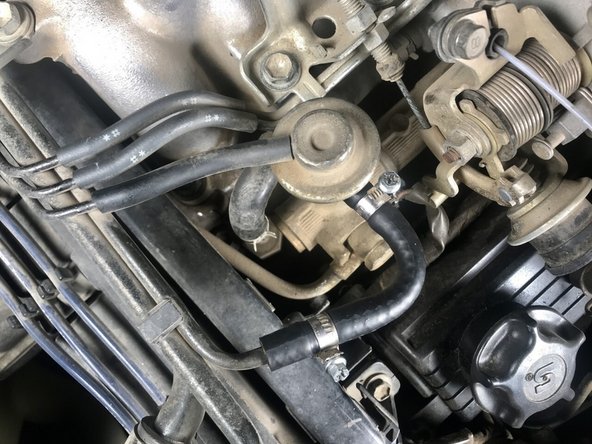 This repair process should be used for repairing a broken or leaking pressure regulator fuel return line on a Toyota vehicle manufactured with a 3VZE engine, typically on the SR5 model manufactured between 1989 and 1995.

Smelling fuel in the cab is a good indication that this line may be leaking. Typically, the smell is worst with the A/C vents on and during or just after startup, as the fuel will have been leaking while the vehicle was off, which allows fuel to pool and create a stronger smell. This leaking fuel poses two main problems; firstly, it can create noxious fumes in the cabin which can create an unsafe driving condition. Secondly, it leaks into the environment surrounding roadways, which negatively impacts those environments.

Toyota Pickups manufactured with the 3VZE engine have a fuel pressure regulator located very close to the engine block. It has a rubber hose that makes a 90 degree corner, and high pressure fuel along with high heat due to its proximity to the engine block causes fairly regular failure of the rubber line.

Before beginning the repair, first check to ensure the return line is what is leaking. To find the return line, refer to step number three of this guide and inspect the line for leaks. It will appear shiny, smell of fuel, be moist, and may have a jet of fuel spraying from it if the engine is running and a pinhole has developed. If it is not leaking, do not continue with this guide.

This guide is relatively simple to complete, and requires no specialized skills.