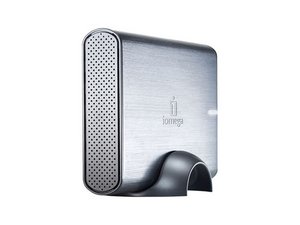 Not enough disk space? Need a backup solution? External drives provide you with extra storage in your office or on the go. Learn how to repair them here.

Can anyone offer disassembly guide for this device please.

Here is iFixit's teardown of one. Here and here are videos on the teardown. Here is a google search to help you if your particular model is slightly different than the examples I provided.

The first answer was not much help, since the iFixit teardown is for the FreeAgent Go (a docked USB portable, where the FA Pro is a multi-interface desktop external) and the YouTube videos were for the 'USB' and 'Desk' models of Seagate's FreeAgent brand.

That's a bit like offering teardowns for random types of Macintosh when someone asks for how to open a mid-2007 20" aluminum iMac. Actually, it is a LOT like that, because in both cases the functional answer is very specific to the model, may vary by obscure revision cases, and ultimately one may well regret the attempt.

The FAPro has no obvious means of gaining access: no visible screws, no soft spots under the SN label, case seams that appear to have been designed to always be razor-tight with soft plastic on one side. Seagate's way of saying "Go ahead, void the warranty. We will know!"

Personally, I'm about to do that to mine because the warranty is years gone, the device went silent in an odd manner, and it was my "big dumps of stuff I don't want to waste backups on" drive. So I can afford to lose it all but it isn't anywhere else…

(Also note: my wife's iMac of the above specifics has been booting from an external drive for some time now because its teardown includes buying $40 of tools I'd use for nothing else and user reports of needing 4 hands pulling with even force to avoid essentially totaling the computer. )

The 1st step in dismantling a FAPro is sacrificing the rubber feet. They are about 4mm in diameter, very soft, and sunk more into the base than they protrude, so a fingernail pull can easily shear one off flush to the case. This is aided by the fact that at the bottom they have a clear layer of slightly harder rubbery material shaped exactly like the inverse of a #0 Phillips screw head.

That's right: the customer-hating folks at Seagate Design *cemented* the feet into the screws that you need to take out first.

You essentially need to auger the feet out in shards, but do so gently: the screws appear to be brass, not steel. I'd bet that one could strip the heads by giving them a stern look while holding a decent screwdriver, and bringing a drill bit into play would be crazy. I have 2 done, and used a wimpy little penknife blade for removal of the feet and cement.