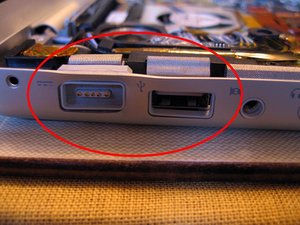 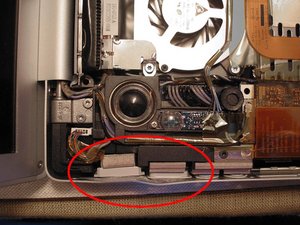 So I accidentally pulled the power cord on the computer which should have released (being a mag cord that is designed to do this), but it didn't, and pulled the computer off of three foot shelf, landing directly on the power cord side. Well, since the cord was still attached, it buckled the outer case near the power receptacle and the USB port. The computer still runs, but it won't charge.

I did make sure it wasn't the cable by using it to charge my other MacBook, so I can rule that out. I'm pretty sure it's the power receptacle part (what is the REAL name for this part BTW?), but took it to the Apple store to check. After a very quick look (I didn't have an appointment), they wanted to replace the entire bottom case and said the repair could run about $900. I laughed and walked out.

I had thought of using another Apple certified repair facility, but after checking reviews online, they appear to all be sketchy and untrustworthy, so I thought I'd at least give it a shot.

After i got the top case off, it quickly became apparent that this was not going to be easy, as attempting to remove just one part means you first must remove several dozen prior.

So before I go and try all of this, I wanted to get someone's opinion. Let me also say that I don't care about the cosmetic damage (I was able to improve this after I took the pictures), as my main concern is to just get the computer to take a charge again.

I could try and follow the directions on how to remove the I/O board, which I'm assuming is what needs to be removed (please correct me if I'm wrong), but wanted to check first to see if anyone else has had a similar problem and might know of an easier fix. Or perhaps someone is positive that this is what needs to be done, I'd like to hear from you as well.

Also, is this something doable by myself (I've mostly worked on my MacPro Desktop, not much laptop experience), or would you recommend me taking it to a certified repair facility? I'm just wary of getting ripped off.

Thanks in advance for any help you can offer.

There is a board in this computer called the "DC In board" that the MacBook's logic board connects to, and this is probably damaged. You can replace this and iFixit sells them, and has a guide to to this. The case damage could probably be worked out as well.

That's great to see pictures! How did you get those on there? :-)

I'd reset the PMU and PRAM, if only just to say you did, and also do a Google search for Coconut Battery, which shows some more detailed battery info than the OS provides. You mentioned you ruled out the AC, but make sure your battery is good, preferably by trying it on the other MBP you have available.

I agree with Chris' assessment, i.e. the DC-in/sound board is likely damaged, and from my experience, power-related issues do go away when it is replaced. Keep in mind though, that it is the bending of the case that caused the board to be damaged, so unless you can straighten out the case somewhat once the board is out, I'd be hesitant to put a new board back in that same case. What I'm saying is, there is probably an indentation on the lower case due to the damage, and that indentation is probably pressing into the board. So if you put a new board in, the case will probably press it in the same spot, eventually leading to the same type of damage.

When the board is out, you can try using some plyers to straighten the case out, or at least bend it a little so that it is not in the way of the new board. If it's not possible, you may want to invest in a new (or used in good shape) lower casing. If you buy a lower casing, make sure to get one for a Core 2 Duo, because I believe the one for Core Duo is slightly different.

Replacement of the DC-in/sound board is not the easiest repair, and I've often done it but then had to go back in again because I forgot something (forgot to hide a chunk of the cabling under a component before screwing down that component, for example), but it's very do-able. Just make sure to power the machine on and test everything before you screw the rest of the machine and topcase together, in case you have to go back in again to correct something.

Go to the bottom of the page to the "Images" tab

You can easily straighten out the case once the board is out with two thin metal flat bars (one each side of the bottom case wall) using small vise grip pliers and applying pressure along the metal bars. Try it...

That's good but the vise grip is limited in depth. Try using a jewelers chasing hammer with the metal backing plate. You can reach everything. Here's the hammer: http://www.amazon.com/Chasing-Hammer-Jew...

Sorry mayer but I would not use a hammer cause the impact could damage internal parts if you don't strip the bottom case. Vise Grip has a very small plier model with long nose. That's was I use to work on the PB/MacBook Pro cases.

Thanks everyone for your help. I really do appreciate it. I have all of the correct screwdrivers and torque wrenches to do the job, but I don't have a spudger. Is there anything I can use in place of a spudger? I don't want to have to wait for it by ordering online.

And rdklinc, you can add pics when posting by clicking on the far right icon that looks like a monitor display.

EDIT: I just realized if I have to order the new "DC on Board," then I might as well order the spudger as well. Hopefully they'll ship soon.

A small flathead screwdriver makes a good spudger substitute, also a guitar pick, or the edge of a credit card will also work.