I have a 44m stainless steel apple watch 4. The screen detached (possibly while charging), but other than that everything seems to work including the force touch sensor. I brought it in to apple genius bar and they suggested that I have it sent in to repair depot. I was told that if the detached screen was caused by a swollen battery, the repair would be free. The repair depot found that the battery was not swollen and wanted $519 + tax (CAD) for repair. I had the watch returned without repair. 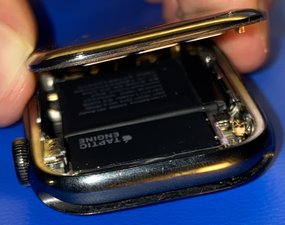 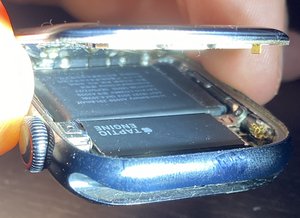 Based off of the above photos I am wondering if apple might have been wrong about the swollen battery. If the battery is not swollen, I am wondering what the best way is to repair it?

I already ordered ifixit apple watch series 4/44m adhesive, but after some more reading I am not sure if that is what I need. The screen is still attached to the force touch gasket except for the corner near the home button. Do I need a new force touch gasket? If not, is there supposed to be adhesive between the gasket and the main part of the watch or does it just sit there? If I need adhesive for the gasket, what do I use?

The force touch gasket is double sided with adhesive. So replacing it will solve your issue if the gasket is stuck to the display. You will need to very carefully remove the display so you can gain enough room to clean both the case and the display assembly of any remnants of the adhesive. Use a slightly damp cotton swab (Q-Tip) with reagent grade isopropyl alcohol 85% or better to clean the surfaces.