I bought this MacBook on eBay, worked fine first couple of days. Then went to restart it last night and it would chime and turn off right away, happened a few times until I held the power button down until Apple logo came up.

When booted, connected charger but it would detect the battery and not charge. I had 32% battery power. Now it's on 18%, once it's dead I won't be able to do anything

MacBook also running slower than normal, did not happen when I got it.

Reset SMC/PRAM and no luck. Tried swapping out DC board, magsafe port, battery from another similar MacBook, same issue. It's the logic board.

I'm sure it charged when I got it, done nothing to it except put it on and update to MacOS Sur. Now this issue. Seller refusing to accept a fault. I don't know history of whether water damaged previously.

What can I check to fix this on logic board please? 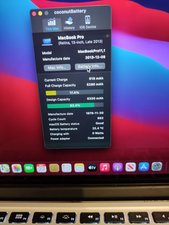 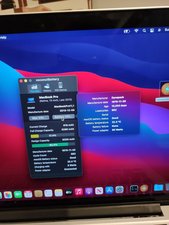 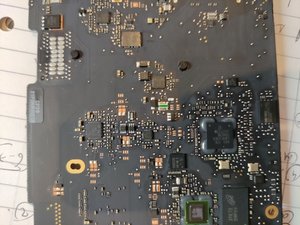 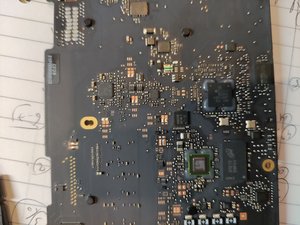 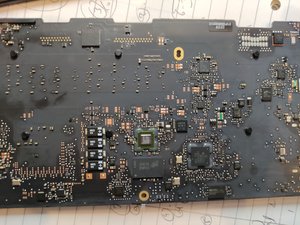 First the battery is on its last legs as its close to the end of its expected life of 1,000 cycles. Some batteries don’t make it to the 1,000 so its possible its running on vapors now!

The charging logic and your MagSafe charger are not working properly! As CoconutBattery is telling us the charger is connected the charger its self is not charging the battery which is should be given the batteries current state of 17.4% charged Charging with 0 Watts!

At this point you’ll need to look for corrosion around the SMC logic. Follow this guide to take it out MacBook Pro 13" Retina Display Late 2013 Logic Board Replacement and inspect both sides for any spillage or corrosion or any damaged components. Make sure the sky blue area which is the SMC chip and its supporting logic is all clean on the backside of the logic board. 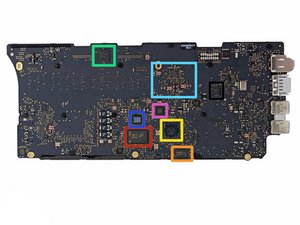 Well I can’t see any signs either, so that leaves only one thing left a knockoff charger which has damaged the voltage comparator resistors! Here’s a good explanation from Louis Rossmann How cheap eBay batteries DESTROY Macbook logic boards! While Louis is describing the Unibody MacBook Pro’s SMC the same logic is used in the Retina models (its laid out a bit differently)

At this point its time to visit someone with the deeper skills to fix your logic board.

● Don't Replace Your MacBook Charger With a Cheap Knockoff

Sadly, it is very hard to tell which is which from the outside. We used a scale to measure the weight as the best way. Using a known knockoff which is lighter in weight to compare with the others we had. We had hundreds to check!

Make sure you bought your charger directly from Apple and its in its original packaging.

I have attached pictures of the logic board and inspected against the areas shown and there appears no physical or corrosive damage I can see.

Thanks @danj. I've watched that video before as I also suspected a similar issue. However I did not use a fake charger. I never use one that isn't Apple. Maybe though before I bought it the seller did, but what's strange is that battery was fully charged when I got it. So he must have charged it somehow.

Anyways, as you say more deeper diagnostics needed on the board. I'll get it checked out.