Powerboard Connector Broke off my Motherboard

I’ve seen this issue come up on this board before, but was looking for some more details on the fix. When I was disassembling my DSI I accidentally broke the power board connector off from the motherboard. 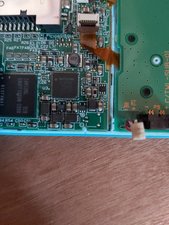 My question is; can the connector be re-soldered to the board as-is? If so, should I apply solder to the two pads on the left side, the two on the right side, or all four? I bought this broken DSI specifically to play around in it so I won’t be too disappointed if I mess up the soldering, but wanted to try and do it right the first time.

Edit After Fix: See below for an “after” picture based on the answer provided by oldturkey03. System now powers on and charges without issue. 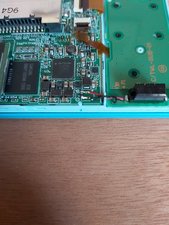 @michaelhe it is the front two (the ones with the + and - symbol) that are the ones that get the power. The back once re o hold the connector in place. Yes, if you want to fix it properly, you will need to solder all four of them. If you have not done this before, be forewarned. Your connector is made from plastic and it will melt pretty quick (quicker than the solder) so I suggest you practice on something old and useless first. Just to get a feel for it. you need the right solder tip as well. If you have never soldered before, this is not the way to learn :-)

For a quick and dirty repair you can skip the whole connector and just solder the wires directly to their corresponding solder pads!

Thanks! I plan to do a lot of practicing before I attempt this, just wanted to make sure I knew what to do when the time came. Will likely do a direct solder of the wires to the pads.

@michaelhe Did this work for you? I'm having the same issue

It did! Was a bit touch-and-go because the two solder pads are so close together, but I haven't had any issues since I made the fix. I went with oldturkey03's suggestion of removing the connector and just soldering the wires directly to the pads. Definitely the easier method if you're new to soldering.

@michaelhe Thank you so much!! I've never done anything like this and I don't want to mess anything up. Did you by any chance take a picture? If not, I understand, but if you did happen to, anything helps.

I couldn't attach the image in a comment, so I edited my initial question with an "after" image. Hope it helps