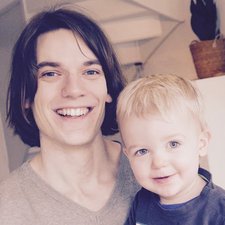 A friend of mine dropped his laptop and the display isn’t working anymore. There is no visible damage. 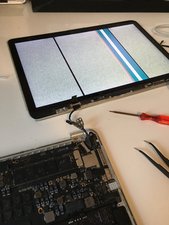 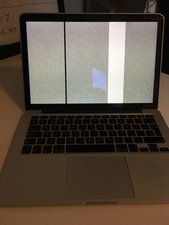 Resetting NVRAM or SMC did nothing.

I tried fiddling with the cable but nothing seems to happen. The friend said sometimes the display worked again when he moved it around. I tried all kinds of movements but it doesn’t happen to me. I keep getting the same snow screen.

I suspect I could replace the cable, and maybe fix the problem, or maybe it’s the display itself, what do you guys think?

Sadly, the display its self is damaged!

The noise you see is the lack of connection to the T-CON logic at the bottom of the panel (where the cable connects) is also damaged!

Time for a new display! The best you can get right now is this one 13” MacBook Pro Display Assembly - StainGate (L13/14) : Grade-B. You can clean off the anti defective coating if its bad.

Parts are hard to find right now due to COVID!

I replaced the screen with on from another (2013) MacBook. I put the broken screen on the 2013 MacBook. Same problem. Black bar and snow.

Funny enough, I had it stored away for over a month. Now I opened it again, and the snow is gone. There is only the black bar left. So it's actually somewhat usable again.

I would first buy a new cable since it’s less expensive than the display. If that doesn’t work, then replace the display and see if you can refund the cable.