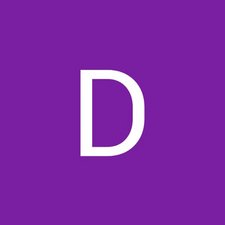 Laptop shuts off when I unplug the charger

I have a MacBook Pro 13” Mid 2012. It first began shutting off at 50% if the charger wasn’t plugged in, so I’ve just been keeping it in for this reason.

I recently unplugged it so I can bring my laptop with me on a trip, tried to plug it back in and turn it on once I got to my destination and it wouldn’t turn back on. There was only a very dim, flashing orange light appearing on the charger.

I opened up the back and disconnected the battery connector on the motherboard, plugged it back in, and now the charger light is green and laptop turns back on. NOW, my laptop has stayed on 96% and shuts off whenever I unplug the charger.

I attached some photos of the System Report and Coconut Battery Health App. I tried doing an SMC reset by holding Shift + Cntrl + Opt and power button for 10 seconds, but I don’t think it worked.

Any suggestions on how I should move forward would be greatly appreciated! 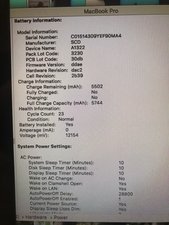 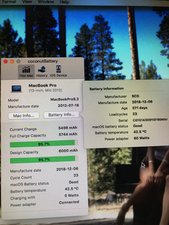 How about using the real CoconutBattery app this is a cheap knockoff!

Download this and its free! CoconutBattery it will tell you the real story of your battery and your systems charging logic.

Post a snapshot of the apps main window here for us to see Adding images to an existing question then we can help figure out whats needed.

Thanks for giving me the correct app, just updated the photo. Hope that helps! @danj

Your battery is bad from the sounds of it. It may be saying that it is at 96% capacity, but it likely is not accurately self-reporting any longer.

Well the good news is your battery is AOK!

As your battery is mostly charged the charger is not charging your system so we can’t see whats happening with it. But clearly its doing its job. Do be careful! If you bought a replacement MagSafe charger you may have a knockoff which can damage your system!

● Don't Replace Your MacBook Charger With a Cheap Knockoff

So do make sure you have a REAL Apple MagSafe buying it directly from Apple.

So. why is my system failing to work after disconnecting my charger?

Sadly, the switching logic on your logic board is not working! Think of how a hallway or stair light which has two wall switches allows you to control it at both ends. Turning it on on one side and then going to the other to turn it off. While this is done with a mechanical switch, your system uses MOSFET’s to achieve a similar task controlling which power source to power your system.

A knockoff charger can damage the switching logic as well as a bad ground or static discharge.

You’ll need to find someone with the knowledge and micro-soldering skills as well as access to the components to fix your logic board.

The other option if you just can’t find someone locally or just can ship your system to someone is to just replace the logic board. This is by far the most expensive way to get you going again.