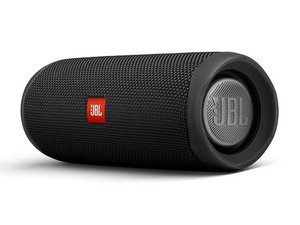 The JBL Flip 5 is a portable speaker.

Speaker works only when plugged in

I bought a JBL Flip 5 to a shop. I got a price cut because it was the one that was available for testing at the shop.

BUT, I don't seem to be able to actually use it like a regular speaker, and I can’t get it back to the shop (far away).

What happens is that when it’s not plugged in to a power source it won't turn on.

When it's plugged to a power source it turns on by itself and no button is functioning. But my computer (running Debian GNU/Linux) sees it as an external soundcard (that is well done jbl!).

I also dismantled it and checked the battery state: it's absolutely full.

When I plug the speaker only the power button lights up, then the charging led (white), then the jbl sound, then that's it.

Is there something to do or am I stuck with a good but rather old-style batteryless wired speaker?

I had the same exact issue with my speaker as well. I sent it to the local JBL repair shop (it was covered by warranty) and they fixed it. When I asked what was the problem they said there was an issue with a ribbon cable.