My early 2013 MBP Retina, 2.7GHz needed a battery. Got the iFixit kit. Install went fine. New battery is recognized by Coconut but will not charge or run the machine. Battery logo in menu bar shows the lightning bolt but says not charging. MagSafe LED remains orange. Coconut says charging with 0W. Performed SMC reset and PRAM reset. Both gave the indication that the resets took place (LED flash on MagSafe and reboot chime for PRAM). Swapped back to old OEM battery. It charges and runs the machine. Swapped back to replacement battery. No change. Thought maybe there was a software thing preventing the use of 3rd party batteries so downgraded from Catalina to Mojave. No change. I checked battery voltage at the battery’s logic board thinking maybe it was actually completely dead but uncalibrated (obviously haven’t calibrated it since it won’t charge or run the machine) and got 12.2V. Screenshots attached of new battery and OEM battery. OEM battery capacity is not actually 80%. I reset SMC and did not calibrate after.

Anybody have a solution? It seems plenty of people have similar problems but many swap batteries without any issue at all. 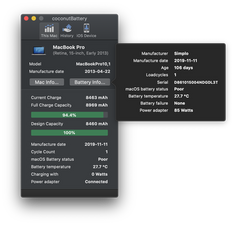 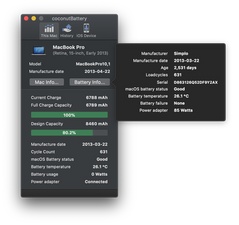