Dead MacBook after each use

My MBP Late 2013 with OS Mojave has some problems, quite frequently it is completely dead. About a month ago it started off with the backlight not working, I'm sure it was the backlight because if I'd shine with a torch through the logo I could see the screen.

I opened up the laptop and looked for liquid damage, but there is no signs of anything. I removed the LCD connector for inspection but looks like brand new. After 1 week all of a sudden the backlight started working again and the laptop was fully functioning.

Now since about 2 weeks I can't turn on the laptop. This mostly last for about a day or two, out of the blue I'm able to turn it on again and it will work again. And then the next day it is dead..

I've done a lot of research and tried a lot of different things for dead macbook;

I'm sure there is nothing wrong with the battery since it is charging probably and sometimes I managed to start the computer without external power supply, or the LCD either since it is not booting when it is disconnected.

If I place my ear close to the motherboard/SSD and at the same time trying to boot I can hear a short, two click sound, I don’t know what that means but that concludes that the keyboard is working properly. I'm thinking there might be something with the logic board (SMC or some capacitors, nothing looks burnee) but could also be the SSD.. I wouldn't think this is a software issue.

I'm far away from any kind of repair store that could help me since I'm on an island in Philippines so I'm trying to figure this one out myself, hopefully with some help from this community. I've uploaded a picture here for you to see! Is there anyone who had similar problems or know what it is? 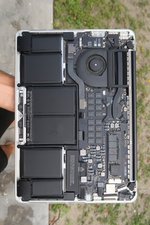 Let’s take a better look at that battery using Coconut Battery and post your results. If it won’t boot, disconnect the mag-safe and battery, press and hold the power button for 10 seconds. Reconnect the battery, then the mag-safe and you should get a spontaneous reboot.

Currently the computer is working since a couple of hours back.. But who knows for how long.. The results look good so I do not think it has anything to do with the battery.. Thanks for your answer!