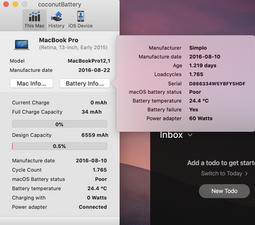 I have been having this problem since last night and have tried everything to fix it or to simply find whats wrong.

The laptop itself immediately turns off when disconnected from the power adapter. The light from the adapter is always Green and never turns Orange, and the laptop itself says that the battery is at 100%.

I have tried resetting the SMC and reseting the PRAM 3+ times, which have both done nothing.

The only abnormal thing that I did was I left the laptop overnight to charge while charging some wireless headphones through the USB port.

Do make sure you have a REAL Apple unit, don’t be penny-wise pound-foolish or be taken in by a bad charger which can harm your system as well as be a safety issue in your home/office.

Do you think replacing the battery will fix the problem or does more need to be done? The charger I have is an official one that came with the laptop itself.

@tobywhalele - Please post the CoconutBattery screen so I can see.

I have posted it.

To start with you do need to change your usage pattern to get more life from your battery (after you replace it) Lithium Ion batteries had there quirks! One of them is they don't like deep discharge/re-charge. Each time you do you loose a cycle.

You need to be more aggressive charging or just tethering to your charger when you can.

Until you replace your battery you've not going to get off your charger and you do put your system at risk as the battery often swells up! And can start a fire.

Okay, thank you very much for the advice.

It could be a defective power adapter or a bad cell in the battery itself. Also check the charging port to see if it is loose. The power port may have broken loose from the motherboard.