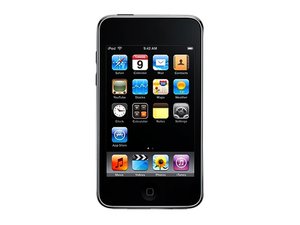 logic Board with Battery issue?

So i took on a ipod touch 2g project to see if I could fix it.

Ipod touch 2g didn't turn on.. completely dead! I took it apart measured the battery it measured 3.7 volts charged. Worked on ipod touch the same day, I removed logic board and cleaned with brush and some isoprophyl alcohol (issue was water corrosion around some chips on the back of the board opposite side of the ear phone jack.) Let board dry for about 3 hours and put back together, touch still does not turn on. I take apart again and measure battery. Battery measure .47v. I Let IT charge over night and max battery charge is now .70v. Could I have broke the battery by taking it apart? I mean i really didn't do much to the battery but take it off of the metal plate, it bent it a bit... Now I am wondering if its worth to buy a new battery or the logic board is shorting the batter now?

Also will a ipod touch 2g turn on without a digitizer?

(I have tried with and without it.)

I doubt you broke the battery, however, a connection issue does seem to be the culprit. I know from my own experience with water damage that if the device is let to sit on its own without immediate action taken to correct the damage, the water will form rust/corrosion on the ICB and on soldering connections. Check all existing connections on the board to ensure no connections were lost or damaged. That can keep the battery from charging as well if the charge controller was damaged. Hope this helps.

The volts dont matter, the problem is the water makes a reverse polarity against the ipod and wont allow it to turn on. Put a new battery in and I bet she turns on for you. I repair about 200 ipods a month and a battery is always a must!!