Hi I have replaced both the video card [brand new] and the screen but the problem has not gone,

Is it the logic board that needs to be replaced? Any way I can confirm this? Thank you

Actually to be more accurate, after repeated rebooting the the iMac started working normally,

I then did the hardware test and all passed but now after almost 3 weeks it has stopped working with the same typical 5 pink vertical lines as before,

I have not connected it to an external monitor. Do I need a special cable for this, Thanks again! 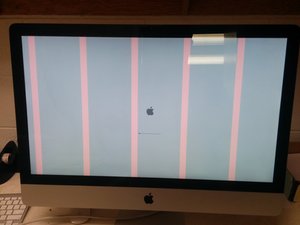 Can you post a few pics so we can see what you see on the screen.

Also have you tried an external monitor to see if the effect is on it as well.

Basically, they used lead free solder for the GPU that made it more environmentally friendly, but with the casing design on these machines holding in so much heat, and the lower melting point of lead free solder, the GPU joints would fracture. The main reason it sounds like its the common problem is because it starts out intermittent, and is most affected when the machine is hot. So the multiple reboots would function the same as leaving it to cool for a while before re-trying.

The only other possible cause is LCD panel or logic, but GPU is most likely.

You noted having tried a replacement GPU already, but was it a re-balled card, or one with the original lead free solder? as you cannot buy these cards ‘new’, it is likely second hand, and very likely suffering from the same fault.

we only ever fit re-balled cards (not re-flowed cards) because of how common this faulty is.

@thebookyard - Thanks Jon for catching this one!

@danj, it was mainly on my mind because we recently had 200 of these cards back from a specialist re-balling company that we're currently stress testing

We identify them as type M, P and Q respectively.

Type M and P are functionally interchangeable (16 and 17) but are a slightly different design.

Type Q has dropped the 2 colour options, so all variants use the same colour keycap now.

They can be found here

We have new listings of complete keycap sets, but in reality, most of our individual keycaps, which are listed as A-Grade, are actually from brand new sets.

@thebookyard - If Apple keeps this up you'll run out of letters ;-}