PS4 crashing and turn off

I have the same problem except, not only it freezes, all of my textures will not load.

See my post below on replacing RTC battery. When it goes, it will cause system to become unstable, not just time errors, but spontaneous quits, and unreliable wake / start.. Since I replaced battery, unit has back to good operation. Battery replacement also requires re-seating the heat-sink to the main chip, so if there is any problem with this, it wil get fixed along the way. And don't forget to blow the crud out of the CPU cooler while you're at it.

It sounds like your PS4 is overheating. Attempt to clean the fan and apply new thermal paste into the heatsink. It is closing intentionally by itself to prevent damage.

Hi fmbt11, thanks for your answer. I changed the thermal paste but, when without success. The console, after the change, showed a blue blinking light and no possibilities to boot: when I tried to go in safe mode it shutted down. So I unmounted the plate under the apu and placed 2 coins (0,20 Euro X 2). At this moment the console is on with white light and I’m downloading the operative system! I hope the problem is solved, but I know that is a temporarely solved because of apu problem. In my opinion the problem still remain in the apu…What do you think about it?

I have this problem with my PS4 pro I had it for less than a year and my console freezes and shuts down then the light blinks blue and shuts down and I wipe out everything and having this issue , reinstalled software and still having problems and I unplugged everything for 2 mins and not working but I might be able to use my warranty?

One reason for older PS4s to spontaneously quit is that the RTC clock battery is weak. The RTC battery may be weak but still keep the proper time. If your PS4 is more than 3–4 years old and suffers from random quits. try replacing the clock battery.

I have a seven year old PS4 (original) that had been solid for years, then it developed a problem where at first it wouldn’t always wake from sleep: the PS button would cause a beep, then the controller LED would blink white (very light blue) about 10 times but the unit would be not turn completely on. Hitting PS button again just causes more white blinks. The top LED is blue but the unit not working. yet also not crashed. Warm air will come case fan port, I looked into possible HDMI port problems, but a force reset always restored operation and HDMI socket and cable are fine. As more time went by, this got worse. Then the PS4 started quitting at random times, in between games, then in the middle of games. It finally became unusable, quitting in middle of updates, etc.

With the help of iFixit teardown guide, I pulled out the mainboard and replaced the RTC clock battery, and now it runs fine. My unit was clean and sign and showed no signs of overheating. It would often die at a cold start.

This repair was easier than I expected and anyone comfortable with tools can succeed. There are a couple of point of the disassembly which will seem challenging, but the only way to go wrong is by rushing and forcing rather than patience and careful work. 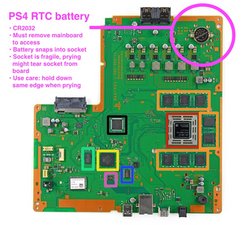