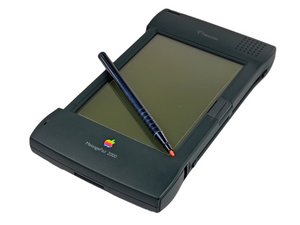 A few years back, I gave my decidedly non-techy girlfriend a Newton MessagePad 2000. She eventually gave it back, and told me that the batteries had died, but she couldn’t open the battery compartment. Her son managed to get it open and removed the dead batteries before they could leak and foul the interior, but still, the battery door appears to have given up.

Besides sending it off to Frank Gruendel of PDA-Soft fame, any suggestions?

Sending it to Frank is never a bad idea. He’s a good guy and will do it for low cost.

This sounds mechanical though. If you are comfortable cracking your MP2000 you may be able to fix it. Looking inside my MP2000, the release latch moves a small lever inside, about 1 inch from the battery opening. Maybe the lever broke and the release latch can’t move it.

I had actually forgotten about this one! I think I'll just send it off to Frank. My (now gone) ex-girlfriend's son had to do some surgery to get it open, so that door will probably need to be replaced, at the very least.

Thanks for the response, though!