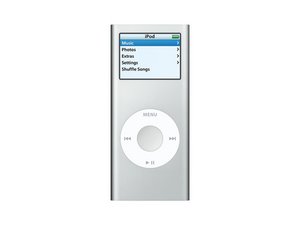 Why can't I use iTunes to add my iPod nano as an authorized device?

I just purchased an iPod nano 4g 2nd generation for my daughter to listen to music (So I don’t have to lend her my phone all the time), but I can’t put all the songs from my library onto the iPod. I can only move the ones I have purchased or gotten from CDs. I subscribe to Apple Music and I would like this device to be authorized to have access to the music too. I am assuming that it won’t work because the iPod is never connected to the internet? I was just hoping that I could add it as an authorized device and then I could listen to any songs that I downloaded from my computer (I have access to these songs on my computer and my iPhone).

You are only allowed to authorize five devices using one Apple ID. When this has happened to me I usually find an old device authorized that I no longer use. Unfortunately, I have found no way to just reauthorize a single device. I had to reauthorize them all and then go back and re-authorize the ones I am currently using.

You can’t put songs from Apple Music onto an iPod, as far as I know. The reason for this is because the iPod has no Wi-Fi, and Apple Music is a streaming service with a monthly subscription. If they let people download the songs from Apple Music onto an iPod with no Wi-Fi, people would be able to keep them forever, as the iPod wouldn't know if the person unsubscribed from Apple Music. They could’ve made it so that you have to plug your iPod into your computer every month to make sure that you’re still subscribed, but there’s an option to change date and time on the iPod, so people could cheat the system. Also, Apple Music was created long after Apple stopped updating the old iPods.