iPhone 7 plus keeps shutting off after screen replacement

I just did a screen replacement on an iPhone 7 plus. The previous screen was almost completely shattered with a large hole in the upper left hand corner.

After I completed the repair, I turned the phone to find that everything worked fine. The camera, microphone, audio, etc... all worked great. I left it on for a few minutes just to make sure everything was fine, and while I did that it turned itself off.

Other than that, there doesn't appear to be anything wrong with the phone. When I leave it plugged in, I don't believe it does this shutdown thing (however I haven't had a chance to test for an extended amount of time).

Has anyone experienced this before, and did anyone come upon a solution?

When the phone enters sleep mode the screen can not wake up, it is likely that the new screen is not genuine and with non-original parts have problems ..

First try to return the broken screen along with the home button and the front camera cable.

If this works, the new screen is not working properly.

2. Check that the screen cables are normal (not ripped off) and the connectors

3. Try to look at the area where the monitor is connected whether there is damage to the motherboard or to the battery cable.

Could you have changed the screen while the phone is still on?

I made sure the phone was off, and I had the battery disconnected during the repair. The last cable I plugged in was the battery.

I'll try moving everything over to the old screen later to see if it still works with that. If that's the case, then I'll initiate a return on the current screen.

the problem could be the IC cover that is on the LCD ribbon is exposing some of the micro caps which is touching the LCD shield when you install the screen. Those caps ground on the LCD shield causing the LCD display to either shut down, over heat or make the display look like its fading out.

I experienced this recently with two iPhone 7 plus, both same problem with over heating and LCD display fading out randomly after changing the screen with an aftermarket screen. I checked the new aftermarket screen and those caps were exposed and touching the LCD ribbon shield. I taped it off with a small piece of Kapton tape and i have not experienced the problem since. 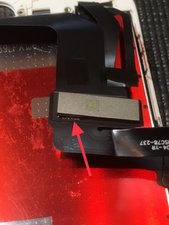 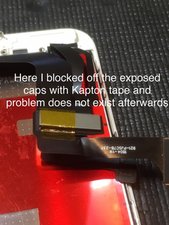 Any update? I have the same problem. The Phone turns off itself and when it turns on the battery shows 1% but when I charge it goes back to 70%.

- is logic board issue?

How did you guys resolve it?

Just disconnect and reconnect the battery fixed my issues

So I took a seat and started trying some ideas I figured out this way :-D

Doesn’t that cause you to lose everything?