How does wake/sleep button work mechanically?

I replaced my iPhone 6S battery. When I got the phone back together it noticed that the sleep/wake button doesn't have it's normal mechanical action. It works, but it works if I shake the phone or barely press the button. It is like whatever normally causes the button to spring back out after pushing it in has stopped working.

What I am wondering is, is the button spring action part of the electronics or is it part of the physical button that you press? Has some little spring-type mechanism just come unseated and I just need to fix that, or do I need to buy new button electronics?

I re-opened the phone but I cannot see anything obvious there, but I don't understand how the button works mechanically.

Apparently my button just happened to pick this moment to fail on it's own. I very much doubt I did anything to cause the failure.

I disassembled the whole thing so I could get to the sleep/wake button. The mechanical (clicky) action of the switch is built into the electronic switch itself. It is not part of the physical sleep/wake button on the outside of the phone. Nor is it something that you'll be able to realign or set.

That is to say, the clicky action is part of the tiny switch that is attached to the Audio Control Cable assembly along with the volume buttons that have the same clicky action, and the mute switch . The action is created by a raised dimple of steel that springs in/out when pressed/released.

The result of this being that if your button works but no longer springs back, you still need to replace the button (that is, all the buttons!).

Take a look at this guide.

There is a mechanical actuator on the flex. The actual Button does not have a "spring" in it. However for the "springiness to work", the actuator has to be in good condition and the actual button has to be properly lined up with the actuator.

Thanks. I did look at that guide but can't tell how the actuator works. It was working fine and I don't think I disturbed anything while replacing the battery, but wondering if something got out of alignment when I pushed the screen back on. If it isn't working (meaning it works but with no spring), does that typically mean one needs a new flex assembly or could it be an adjustment?

I guess I will start taking it all apart and see...

Thanks for your help.

You may have damaged the flex cable when doing the repair. Inspect for tears.

The button works so I didnt damage anything on the cable itself. The only issue is the mechanical spring-back of the button.

Picture of the button. Little clicky bit circled in red... 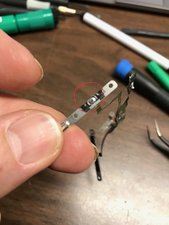