Do I do a RAID or Fusion Drive?

Need to know whats the pros & cons... The advantages/disadvantages, and is it worth it & advisable to do or just leave it like normal 2 partitions separate drives. 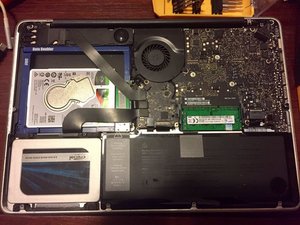 Personally, I think that configuration above is great.

SSDs are really fast, which means everything runs faster because the OS can access the files it needs to run far quicker. They are also more shock resistant and can withstand more ware than a HDD before failing.

HDDs are alot cheaper (GB/$) than SSDs, and that about all they have going for them. They are rather slow, large, and require some sort of drop protection.

SSHDs are a combo of both. They have about 8GB of SSD built in, which gives enough room for the OS, but not programs. They are also cheaper than SSDs, while only slightly more expensive than HDDs.

As for a fusion drive, I don't know about these but if I where to guess, I would say its like a SSHD with two separate drives merged into one digital drive. Possibly @danj could explain better.

RAID doesn't really apply here, as it is for cloning a drive or splitting the bits into parts for transferring onto each drive faster. RAID will only slow the SSD down.

If I where you, I would just have two drives. My SSD with my OS and programs, and my HDD for videos, pictures, music, etc, etc. Hope this helps!

Hardware RAID 0 requires paired drives (same make & model and same interface speed) A software RAID can allow you to use two different HD drives but it still needs the same I/O channel (same read/write speed). So in this case this is not workable with either method.

Apples Fusion Drive was designed to have a traditional HD and a high speed SSD fused into one logical drive. The OS then manages the placement of the file based on its call rate and what it is. The I/O of the SSD needs to be the same or faster than the HD.

As you currently have a SSHD it does add a wrinkle here... The SSHD its self manages what it stores within the onboard SSD cache which likewise is based on call rate and what it is. So when its used as a replacement drive of a traditional HD it offers the zip on boot up and depending on the depth of the cache SSD, support for your applications and/or data files.

When you introduce a SSD into this with a SSHD it does effect the way things were designed to work. I have not done any testing mixing SSD's with SSHD's within a Fusion Drive set. On the surface I don't see this as a problem but it might cause excessive wear of the cache SSD. Remember, the two drives are both trying to do the same thing here. As the OS is top dog it will force the movement of files between the two drives (FYI: the SSD files are in fact duplicates on what is on the HD).

So what would I do here?? I would leave the drives independent and manually manage the placement of the files. Here I would have my OS & Apps on the SSD and then use the SSHD as my data drive. As you have such a large SSD you could keep your current project work files on it.