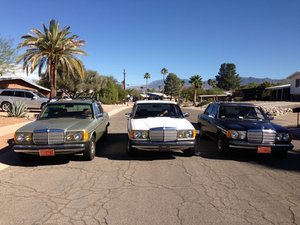 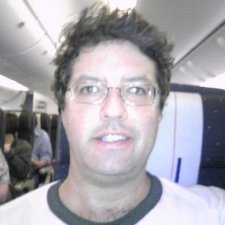 I just bought a restored Euro spec 1983 Mercedes 300D W123 that was running beautifully until last week, when I filled it up with Propel Diesel HPR, a renewable diesel that is supposed to be compatible with all diesel engines (and is marked as Diesel #2 that meets ASTM D975 specifications: http://www.dieselhpr.com/ ). Then I drove for four hours to Las Vegas from Los Angeles without any issues. It ran well for that evening after driving to a restaurant, parking, then starting again and back the hotel, where I had to park it outside on a cold and rainy night overnight with about a quarter tank left.

The next morning, I had a crazy cold start and the engine was shaking and wobbling a lot, along with the car as a result, even while I was driving slowly and definitely at idle. It eventually evened out, or so I thought. I figured it might be the Diesel HPR, so I filled it up later that day with regular Diesel #2 but the issues didn't go away the four days I was there.

I drove back to LA four days later, experiencing no issues on the highway, where it sounded and ran well. I ran the tank down until the fuel indicator went on, and then, in an effort to rule out Diesel HPR as the culprit (since it's supposed to be better for the environment), I filled it up with Diesel HPR again, thinking maybe it was just the cold in Las Vegas that caused the issues.

This week in LA, the temperature hasn't been as cold at night, even though I park it in a garage, and the issue seems to be worse. The wobbling isn't so bad once I get going, but it's there at the start and sometimes when I stop for a light. Meanwhile, the clicking sound is pretty constant, and sounds as though it's coming from the bottom of the car, though it sometimes quiets down at higher speeds and randomly at some lights. Since it was literally conking out during the cold start once I started reversing or driving slowly, I am now cold starting with the ignition lever turned up, and that hasn't really made much of a difference (just makes the clicking sound faster). Also, white smoke comes out of the exhaust during this initial starting period, and a few minutes after getting on the road, though it seems to disappear later. I've been waiting for the glow plug lights to go off, as indicated in the manual. (Weirdly, the glow plug light went on again a couple of times after the car started during the rough cold start/idle.)

At any rate, at this point, I'm not even sure if it's the Diesel HPR or something else (the cold, driving to LV) that created the issue, but am wondering if anyone has any ideas as to what the issue could be. Or does anyone have any experience with Diesel HPR and older diesel engines? I'm hoping this is an easy fix, since I just bought the car.

I'm going to take it in to get looked at, but am wondering if this is serious and urgent or if I should try it one more time with regular diesel to see if that clears up the issue. I definitely don't want to make the car worse if driving it more to troubleshoot does that.

In a perfect world, I'd like to be able to use Diesel HPR as it is better for the environment, so I'm wondering if it is even the culprit here. Thanks in advance for any advice or insight.

I would venture a guess that you have a sticking fuel injector and cause is loosened carbon and sludge deposits. The change in fuel coincides with deposits being dislodged. Clicking noise would be caused by injector mechanism not moving smoothly (spring sticking, disc hanging up, etc.). Since the injector is not operating correctly, the cylinder is misfiring, causing rough running and loss of power. Switching back to previous fuel type may help, but at least one injector needs attention. You should be able to locate clicking injector using a mechanic's stethoscope or by placing a long screwdriver onto injector body, then putting your ear against the screwdriver handle. Factory manual procedure is to isolate misfiring cylinder by slightly loosening fuel delivery line at injector body, with engine running. A good injector will cause engine to stumble and run roughly when line is loosened. After loosening and confirming injector condition, tighten the fitting snugly, then move on to next injector. Test each one by one until faulty unit is located. Injectors can be rebuilt, but it is not for the novice. Better option is to buy rebuilt injectors and replace any which are suspect. FYI: unburned fuel due to misfiring will dilute oil and wash down cylinder wall leading to accelerated wear. Attend to this problem promptly to avoid premature damage.

I would bet that changing fuel filters and running REAL diesel fuel will eliminate this problem. Our engines after all are DIESEL engines. Anything else is suboptimal regardless of it's "benefits" to the environment.

I agree this answer

Not a total answer, but I have had the same issue as you, with the same fuel. I am 80% certain the issue went away after running normal diesel for a couple tanks along with diesel clean additive. Switched back to HPR and the problem has come back, bit it is intermittent. Again, can't be 100% certain as I will switch back to normal again for a couple months again, and see if it goes away and doesn't come back. There are many possible causes of this sort of problem, like vacuum leaks or faulty injectors/injection pumps.

Just want to clarify one thing, vacuum leaks cannot cause an issue like this on a diesel. Diesels do not create vacuum and do not need vacuum to operate properly. The vacuum used to run the brakes, transmission shifting, door locks, etc. comes from a pump on the front of the engine and the vacuum system is isolated from the engine otherwise.

In Atlanta, Ga. on a cold day (24 degrees), I had forgot to plug in my block heater. I had to recycle my glow plugs eight times without trying to start the motor before I got the motor started. There was a lot of white smoke, like a low cloud and the car ran very rough. I only use diesel fuel but in cold temperatures the diesel will gel and either not move at all and the engine will not run or move slow and engine will run rough. After running for at while the returning hot diesel warmed the fuel tank and the smoke went away and ran great as usual. You may also have one or more bad glow plugs as the glow plugs help smooth the engine until it warms up. If you have just one glow plug not working then your motor will run rough until the motor heats up.

FYI, the glowplugs will continue to heat for AT LEAST 30 seconds after the indicator on the instrument panel is dimmed. Try waiting an extra 10-15 seconds. MUCH better than cycling the glowplugs nine times.