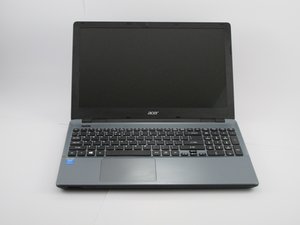 I have an acre aspire that won't turn on. When the adapter is plugged in the blue light comes on to indicate there is power and when I press the on switch the blue lightbulb light comes on for a few seconds then goes off. The laptop shows no other sign of life. Please help

It could be a problem with static discharge , if so do the following.

3. Hold down the power button for 30 seconds , then release for 30 sec and then hold down for another 30sec

4. Plug in power ,replace battery and power on laptop.

If this causes no Joy try this.

Remove memory and reinstall one stick at a time, if there are more than 1 dimm of ram, try each stick in each slot one at a time to see if the memory is ok and to determine if one of the memory slots is bad.

my acer is built in battery

do i have to disassemble my acer laptop

Even i have the same problem... I have aspireES1-531-C4DV it has built in battery not able to remove... When i put a cord both the orange and blue indicators are blinking but no power is circuiting please help me

there is a small pin hole on back with a little pic of a battery and holder nxt to it.

unplug power first then put pin in hole and you feel it click, once you get the click ,hold down for 25 seconds,,

put power back in and tun on acer.

Did anything happen to the laptop? Dropped / Liquid spilled onto it?

If not, try removing the battery and plugging in the mains charger and see if it powers on.

It's my moms laptop and she says she didn't drop it or spill anything on it. The screen is cracked but that happened weeks ago.

It sounds like there's a short somewhere that's causing it to power off. Does the charging light come on when the charger is plugged in?

yes it does turn on

One of my clients went with the same issue, so I reviewed deeply and I found the exact trouble. The cooling system of this particular model is very deficient. So the processor joints have broken (maybe more than one). The only solution here is to make a reballing to the mainboard.

I already did this and the laptop at last started as before.

I really don't know if this solution will be permanent, but for this time is enough.

It can be caused by dead or halfly dead RTC battery. :)

I have same problem with an Acer Notebook (Aspire E5-575G from around 2016). During normal usage it instantly went completely OFF and never came back. Tried all version of cable-plug-in-out/power-button/battery-disconnect etc.

If I plug-in the power cable, the orange/blue LED are lighting and thus indicating battery is charging/full and mainboard is correctly powered. But if I now press the POWER Button the LED is flickering (gets a little bit darker, went off, and comes back within about 2 seconds). For me it seems as there is any short circuit / overload present on mainboard.

I opend the notebook and searched the mainboard for any obviously demages (died ELKOS, resistors etc), but could not see anything (but it is hard to distinguish). Made the above test with opened mainboard again: during this 2 seconds-LED-flickering-after-power-button-is-pressed I can hear a very silent noice/squeeze coming maybe from nearby the DIMM/RAM banks. PLUS: I noticed, that a certain component gets very hot, which in my eyes shold not happen. I marked this component on the picture (see below), labeled with “2R2 628 E47”. I guess it is an resistor? And I guess just changing this is most likely not the to solve the root cause. Anybody does know it better?

Maybe the most important point: the failure just happens 2 days after I had to use the notebook with an non-original power supply - and I guess this was the cause of failure. It was an older universal power supply with 100W and a voltage switch (12-24V, I of course just used the 19V setting, but maybe it is malfunctioning or have a bad DC signal…).

So bottom line: just use appropriate voltage supplies for your notebooks ;-)

For sake of completeness: I also changed CMOS/RTC battery (CR2032, 3V), but no change.

I think I will give up - and order a identical, used Notebook and will “just” switch my SSD.