I want to replace the complete glossy hi-res display assembly with a hi-res matte one.

The issue is that there aren't really any matte 2012 units available.

Is it possible to use the early/late 2011 display assembly on a mid 2012 MacBook Pro with the same resolution?

I've found some answers that say it is possible some say it isn't.

Thank you very much for your help!

I want to conclude this thread: YES, it is possible.

The LCD panels in A1286 MacBook Pros are the same from 2009-2012, the only light issue is the physical shape of the display connector - the critical electrical pin out is identical. To fit the 2011 display connector into a 2012 logic board connector socket you have to remove a little bit of metal from the two contralateral sides of the connector (nowhere near the conductors), then it fits properly. The shape of the 2011 display assembly is the same as the 2012 counterpart (meaning location of hinges etc.), it will fit on the 2012 lower case perfectly.

Bluetooth, Wi-Fi, the FaceTime camera, brightness adjustment and closing the lid to go to sleep, all is working without any trouble.

I hope this information helps people since dedicated 2012 spare parts are rather rare and the 2011 machines are beginning to die due to the AMD GPU issue, so they are going to pop up for parts.

Thanks for letting us know, that it worked out. I d'like to do the same.

JohnnieB -- Thanks for going for it! I want to accomplish the same thing and given your exploration I think I can handle it, but here's the thing: my Early-2011 1680px donor needs to go into my Mid-2012, which is currently 1440px. I'm betting that changes things, huh? And finally, I've seen another non-iFixit tutorial that suggests one can swap the glass and/or the LCD (by gently removing the glass and going in thru the front) alone and not the entire display assembly or shell. The procedure demo look super easy in comparison, but may be ill-advised or not possible in 2012. Thoughts there?

Forgot to mention, this would be a 2011 MD035 1680px display into a 2012 MD103 board, If it matters. Processors, etc are basically "the same, but different." Appreciate any knowledge you have to share.

Will try if my early 2011 hi-res matte will fit and let you know.

Standing by, Lubi. Thanks!

For the rest - again - check the catalog

With some "mild modification" (see below) the screens will work they are not however a straight swap.

Thank you for your response.

I know about the catalog entries. However in my experience sometimes the compatibility specs aren't always sacrosanct, e. g. local part shops claim that early and late 2011 display assemblies aren't interchangeable, iFixit states that they are.

From the photographs I've found so far I cannot distinguish physical differences between the early/late 2011 and the mid 2012 display assemblies.

I wouldn't consider it to be that far-fetched that there also maybe weren't any electronical changes since the Intel Sandy Bridge platform of 2011 and the Ivy Btidge of 2012 are closely related.

I've hoped that someone with actual access to these parts or even an user who attempted that change could shed some light on this issue.

The differences pay attention to 2nd paragraph under internal differences.

I've read the entire page - which part is leading to the assumption that the display assembly itself has undergone any physical or electronical changes between 2011 and 2012?

Some confusion: I created this thread a couple of months ago with my user name used to log in, yesterday I used the registered e-mail address, for some reason the forum software seems to think there are two separate accounts.

I posted the answer with the "mild modifications". I had been looking around for real mid 2012 display assemblies but could never get my hands on one, last week I was so annoyed by the glossy one that I snapped a little bit and just went off and got a 2011 display assembly to try it for myself :)

While this is an old question it needs an update with the proper answer!

The 2011 and 2012 models are really the same displays mechanically! The only issue is the 2012 LVDS connector & cable was sourced from a different supplier which uses a slightly smaller fiberglass tang on the cable end connector. So you need to carefully grind the 2011 displays LVDS cable as I’ve shown here with an emery board nail file. 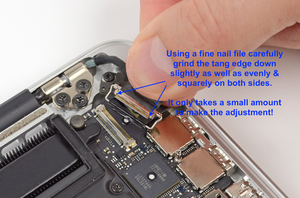 I only recommend using the better Hi-Res displays on the 2012 systems. The GPU logic these systems have can offer the full fidelity. The lower end 2011 GPU options don’t benefit having the Hi-Res displays to installed.

I’ve done quite a few of these mods and the system I’m banging on right now! It’s a 2011 system which had a Hi-Res matte display that I upgraded the logic board to the 2012 2.7GHz NVIDIA GeForce GT 650M logic board. Best system Apple didn’t make!

I've did just that. Used 2011 hi-res matt display and installed it on 2012 2.7 Ghz Nvidia GeForce GT MBP. Little grind on the side of LVDS cable connector using nail file and it fit just fine. Once finished and re-assembled "Best system Apple didn't make".

I have just done this, huge thanks to the earlier commenters for all their advice and help! 2011 screen successfully fitted on a mid-2012 MacBook Pro (which I am now using to type this comment) just by using nail clippers to snip off the excess plastic width on the data cable connector.