Backlight is not working after replacing the screen?

Hello We have Macbook air A1369 (EMC 2469) , back-light doesn't working after replace the screen, appreciate if you could tell us where we can found fuse and led driver.

many Thanks in advance, A

"Where" on the logic board, or "where" as in SOURCING for the part, by the way? Could be either. I'm not sure what you want. And I'm curious... your question reflects that you are certain it's a logic board issue. For the benefit of others (you know... the purpose of this forum), you should include how you arrived at that conclusion. One, because you could be wrong and one of us might catch it. But more likely, you'll help someone else down the road navigate the same issue. Just encouraging you to "add" to questions with explanatory narrative that tells us how you got to the step where you need to locate or find a supplier of, the fuse or driver. Just a suggestion :) Thanks

One of a handful of reasons... Here's the list, in order of simplicity (easiest to most difficult or expensive):

1. I'm working on the assumption that anything is possible, and that you are amateur in repairs. First check to make sure you're using the appropriate display assembly. This model can use both the 2010 and the 2011 11.6" display assembly with the 30-pin (I believe it's 30... I'll check) LVDS cable connector. While both a 2012 & 2013 looks very similar, they are not compatible because the LVDS cable is ever so slightly different. Make sure you have the right one. That being said...

2. The LVDS cable isn't seated properly. Reseat all cables (this procedure should be done while the battery is disconnected... ALWAYS)

3. The pins on the new display's LVDS cable (or on the port of the logic board that receives it) are damaged and you will either need a new display (if the LVDS cable coming from the display is damaged), or need a new logic board (or repair the current one) if the problem lies with the receiving port. The only real sure fire way to test this is to use a known good working display and swap it in. Does the known good display work?

IF YES, the replacement display you have is faulty in some way (check the LVDS cable pins and the backlight ribbon connector underneath the hinge. I can take a pic for you if you end up needing to do this.

IF NO then the logic board was damaged somehow and it will need repair or replacement. If you don't know how to do that yourself (which I'm guessing you don't), then many of us on here can recommend good solid vendors who repair these boards without spending a fortune. Usually, a rework like that is <$200 for the consumer.

4. The backlight on the display is either faulty (either it came that way, or you shorted it somehow -- from improper ESD handling protocol or having the battery connected while swapping the screens) or the ribbon cable that connects from the actual backlight LED strip to the small circuit board underneath the hing of the display that powers it has come loose. It isn't likely, but it has happened to me before with refurbished display assemblies. This is a bit harder to get to, but easily remedied if you know where it is and how to get to it.

That's about all I can think of... try to get ahold of a known good working display (ie, one you physically see light up in front of you... take it off that macbook air, and try it with yours. Make sure you're pulling a 2010/2011 display module).

Double check your backlight cable. It is the small cable in the middle of the polarizer control board. It has to be installed with the white strips facing up. So when you inserting it during installation the cable has to be twisted. It is a pain….

My god you helped me Jurek R ! JCarter scared me ! Thanks !

Crickey, I was just searching on AliExpress for a new backlight when I came across your comment, LOL, I should have figured that. Cheers !

After reading jcarters pretentious answers, I too was worried. Turns out it was exactly as you said, the white strips were not facing up. The cable is bent in a way that it goes in perfectly upside down, and yes it's a pain to twist it, but that solved the problem perfectly! Thanks jurek!

Thank you for your feedback, I had back light cable wrong way after reading your comments my problem was fix, thank you again.

info, besides all the great points that jcarter is making, here are the images showing the fuse and the LED driver. The fuse is a 3amp 32V SMD component in a 603 package. The backlight driver is a LP8550 white LED driver with integrated boost converter. Check the datasheet for it on here. Hope this helps, good luck. 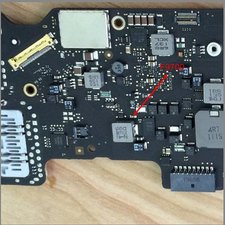 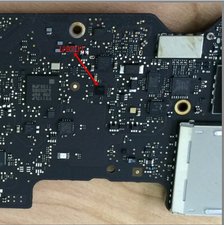 Just one tip about the fuse since he's got you inspecting it... don't trust visual looks. It may look completely intact and normal, and still need replacing. You'll have to test it as oldturkey points to with the specs. Great link, old turkey! I need to start bookmarking logic board component pages myself!

i think i ripped out the LED lights…