suspected faulty power supply on iMac intel 17". How do I diagnose?

Took it home, plugged it in, pressed power button and got no signs of life whatsoever. So I suspected the power supply.

I took it apart. Looks like nobody's tried to fix it so I may be in luck that its a small problem. I read that there are 3 diagnostic lights on the board to indicate power/communication with board etc. only the first led is lit when plugged in. When I press the power button I get no response or other lights come on.

The power supply looks a little grimy compared to other components. Any help in indentifying the problem would be much appreciated. Thanks.

Kristopher Perry, my usual disclaimer is that I am not a Mac person, but have some pretty good idea about the hard ware. Anyhow, here is what I have in regards to the LCD's. You may want to start with those:"

The iMac G5 has built-in diagnostic LEDs (shown below) on the main logic board that can help you to troubleshoot the computer.

To access these LEDs, remove the back cover of the computer:

1. Turn your computer off (choose Shut Down from the Apple menu). If you can't shut it down that way, you can turn the computer off by pressing the power button for five seconds.

2. After the computer is off, disconnect all cables and the power cord from your computer.

3. Place a soft, clean towel or cloth on the desk or surface. Hold the sides of the computer and slowly lay it down so the screen is flat against the surface and the bottom is toward you.

4. Raise the foot and use a Phillips #1 screwdriver to loosen the three screws at the bottom of the computer by turning them completely counterclockwise. These are “captive screws,” which means they're not supposed to come all the way out.

5. As you hold the metal foot, tilt the back cover up and lift it away from the computer. The back cover with the foot attached should come off easily. If it doesn't, make sure the screws are turned completely counter-clockwise, but not too far.

6. To protect the computer from electrostatic discharge, ground yourself by touching metal surface inside the computer.

Always discharge static electricity before you touch any parts or install any components inside the computer. Don't walk around the room in socks or bare feet, for example, until after you've finished these steps.

7. Locate the large white arrow in the middle of the board. 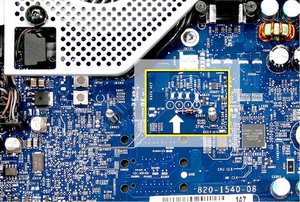 indicates that the computer and the LCD display are communicating. This LED will be ON when the computer is turned on and video signal is being generated.

lights only if the computer detects an over-temperature condition. This LED will be OFF when the computer is turned on and running at the correct temperature." Hope this helps, good luck.

Thanks for the detailed info old turkey, but I've already got to this point by myself. The question I'm putting out there is "I only have the first led lit... Now what?"

Looking at the diagnostic LED and your description, it does sound like a bad power supply. Do you have a number on our power supply that you see? There were several revisions of this model. Specifically with and without the Ambient Light Sensor. Check your power supply for bulging leaking caps. I think that was one of the biggest issues on those power supplies. For repair you may want to check on here.

Power supply model is m38a/m60. No bulging capacitors as far as I can tell. Like I said tho, components do appear grimly. Perhaps the electrolytes leaked out of one.